Our family spent Thanksgiving in the Smoky Mountains this year. Since this was our first time to the Gatlinburg and Pigeon Forge area, we weren't sure how to spend our time. We wanted to diversify our days between running, hiking and outdoor adventures and visiting local attractions and making outings that we had not experienced before. We were only traveling with our toddler on this trip.

I had heard great things about Dollywood. But we were curious if it could live up to our love of Disney. Hubby had worked at Walt Disney World and I have visited Disney about fifteen times over the years. We both loved Disney and weren't sure how Dollywood would compare to the amusement park in Orlando. But we definitely wanted to check it out. I had heard that they had great roller coasters. So I envisioned that it was something similar to the Six Flags Great America Amusement Park in the Chicago area. But it was nothing like it. We compared it the cleanliness and whimsical nature of Disney with big, exciting roller coasters mixed throughout family rides.

We visited the day after Thanksgiving and we had heard that the crowds were going to be busy. The lines for the toddler lines were long(ish), but not unbearable. The longest line we stood in was for parking, followed by the new Bear Ride. The roller coaster lines were about 60-90 mins wait. We paid the $15 parking fee and walked instead of taking the tram - because those lines were longer as well. We forgot to bring our stroller in and I wish we had. By the end of the day our three year old fell asleep and we carried her back through the park and the long jaunt back to the mini van (lines were even longer for the tram on the way back). That's our only regret about the day. It was busy, but not totally overwhelming like some of our trips to Disney World have been. Just before dinner time they did make an announcement that they would be staying open an extra hour, until 10:00 pm, due to the crowds. 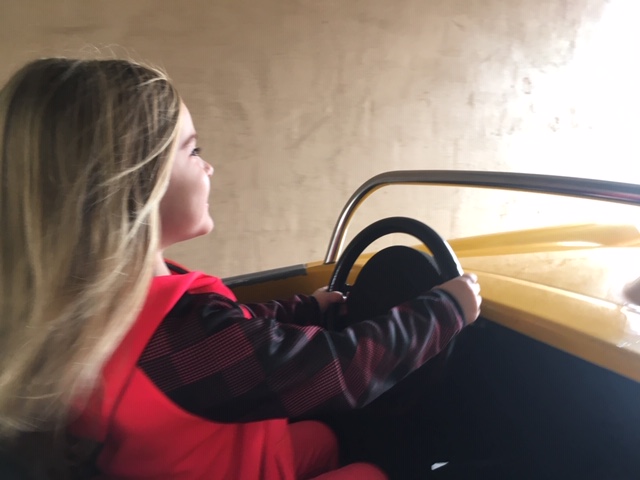 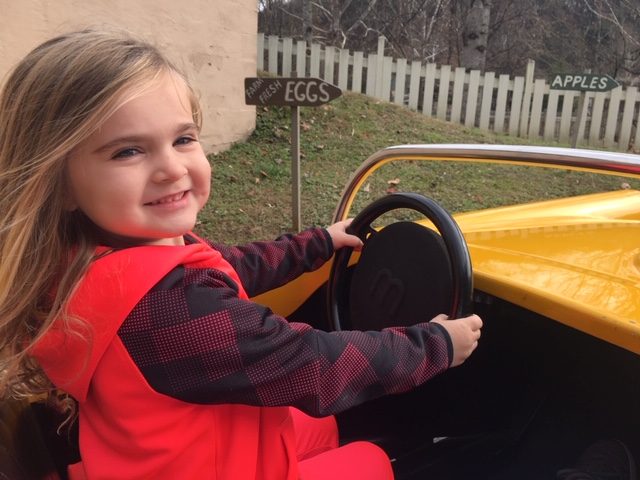 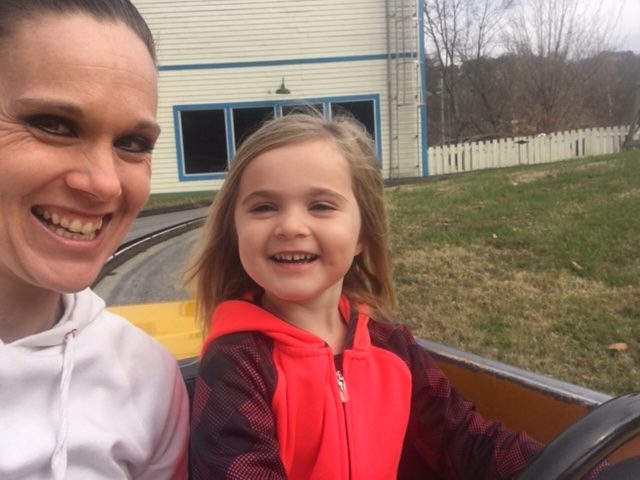 We started out on Rockin' Roadway, which was a fun experience. She had fun driving the car on the track and we were able to cruise with me while listening to rockin' holiday tunes. It was a perfect way to start our day!

We spent a majority of our time in the toddler areas at The Village and The County Fair. These were great for 2-4 year olds. There was a TON that our toddler could do and we could have spent much more than the couple of hours we spent there. There were several rides and attractions that we didn't spend the time enjoying, because there was so much more of the park to see. Some of the rides that were more carnival-like didn't generate as much excitement from our toddler, but the lines were short and she was able to hop right on. She enjoyed the Flying Elephants and the Shooting Star the most. Both rides resulted in a lot of giggles from her! 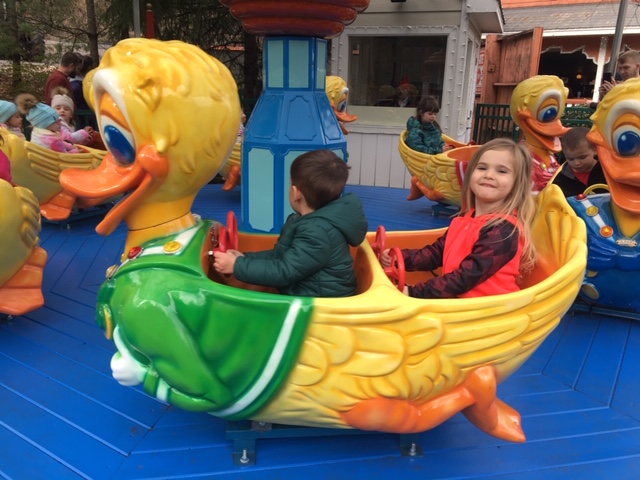 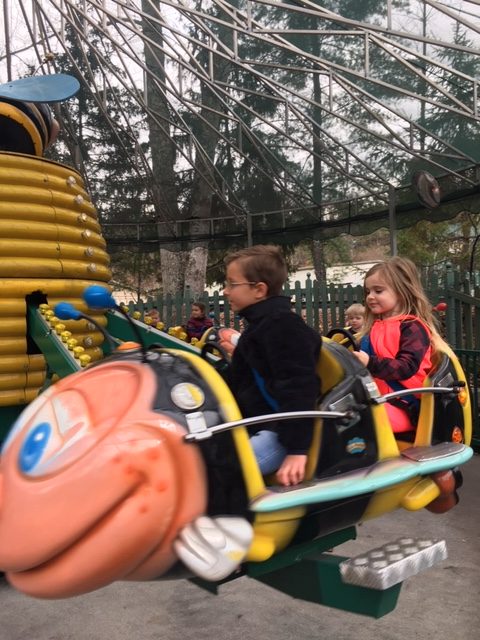 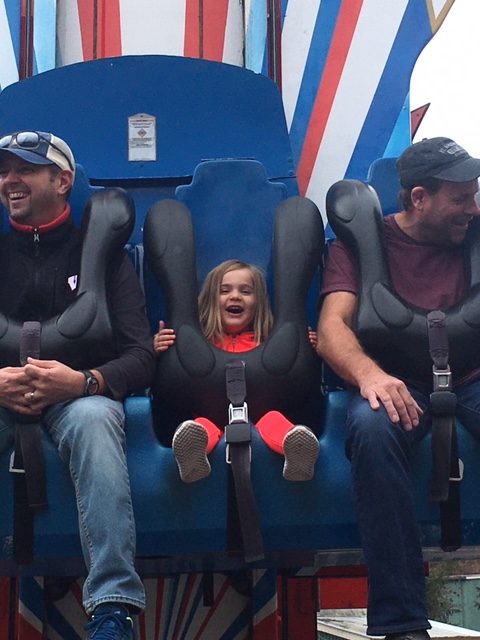 While we rode her favorite ride, the "orange roller coaster " (aka the the Whistle Punk Chaser) multiple times, my husband rode the Drop Line. The ride has some of the best views of the park, rising and dropping you a whopping twenty stories from the sky. I also wanted to try the Lumberjack Lifts, but will save that for next time.

The Eagle Mountain Sanctuary blew our minds - especially the toddler's! There were dozens of bald eagles being observed in this 30,000 square foot sanctuary on the mountainside. It was breathtaking watching them in their habitat. All of the eagles were non-releasable. In this area, Owen's Farm and Craftsman's Valley reminded us of a country version of Disney's Main Street USA. It was beautiful with its beautifully decorated shops, restaurants and rides. Everything was just amazing at Christmastime. I felt like a small child, walking around wide-eyed. 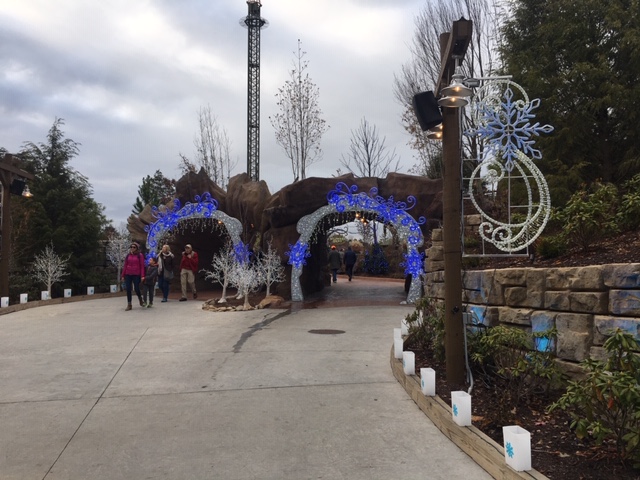 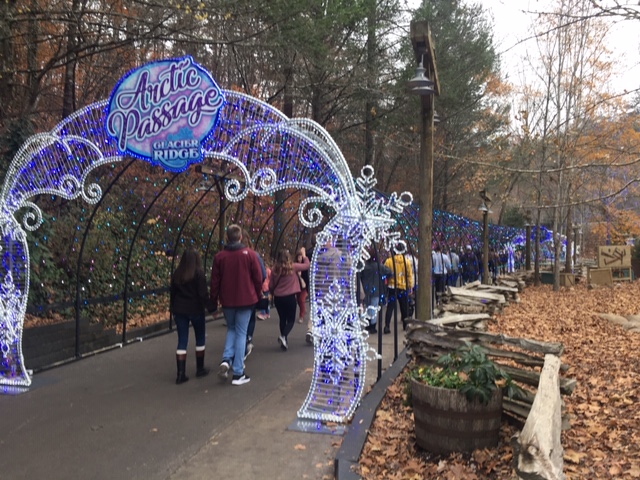 The newest area, Wildwood Grove, had a lot to to offer for toddlers and the whole family. We spent a couple of hours here as well. Everything was clean, whimsical and state-of-the-art. The area had just opened earlier this year. Our daughter loved the indoor play area, Hidden Hollow, and we were able to rest our feet a bit while she made all of her "new best friends" and played for a really long time in the play area and climbing structure. No wonder she passed-out an hour later! In this area, we stood in our longest line of the day at the Black Bear Trail ride. I giggled about it and it's pokey-ness, but she loved it. There were just as many adults solo riding, which caused the line to be longer than we expected. The new area had heaters in the waiting line though, so this was welcome as dusk approached. The butterfly tree was pretty fascinating to watch too, as we watched one of its light shows kick-off before we headed back to the other areas of the park. 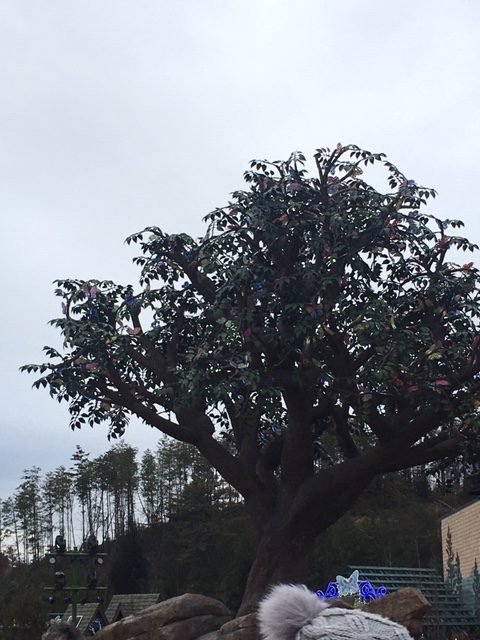 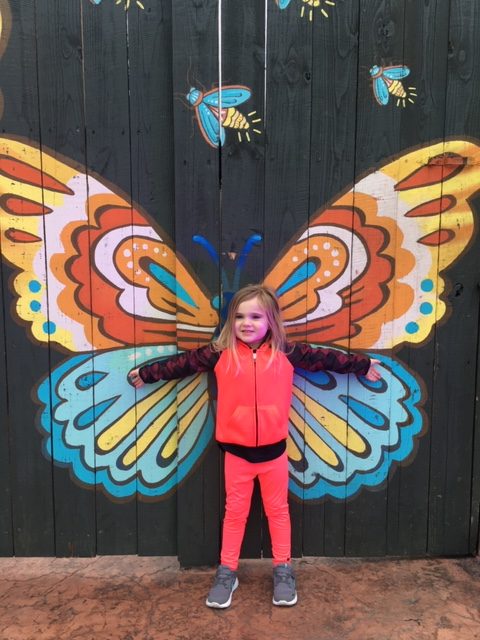 We weren't sure what dining was going to be like. We figured it would be a lot of over-priced fast food, if you didn't opt for a sit down dining experience. But we were wrong. We opted for a quick service meal at Victoria's Pizza in between little kid rides.  The line was short around lunch time, but an hour later it was packed. The individual pizzas didn't look too great, but they tasted amazing. Our little one ate her entire pizza, minus the couple of bites that I tried. They also had various pasta dishes. I had a bread bowl with pizza soup, which was also better than it looked behind the counter.  Later, we ventured through the rest of the park and the lines for quick service and sit down meals were very long after 2:00 pm. The menus for all looked amazing a a huge variety. I never once saw an overpriced cheeseburger and fries basket on the menu (though I'm sure there was a tasty cheeseburger basket somewhere). The variety and offerings looked amazing. We both commented on this. I don't think that any of these restaurants would disappoint your family from what we saw. That was our only meal in the park, since we left just after dinner time when our toddler tired out, so we grabbed something on the way back to our cabin. There was more than a half hour wait for the famous Cinnamon Bread, so unfortunately we only were able to smell that.  Next time! 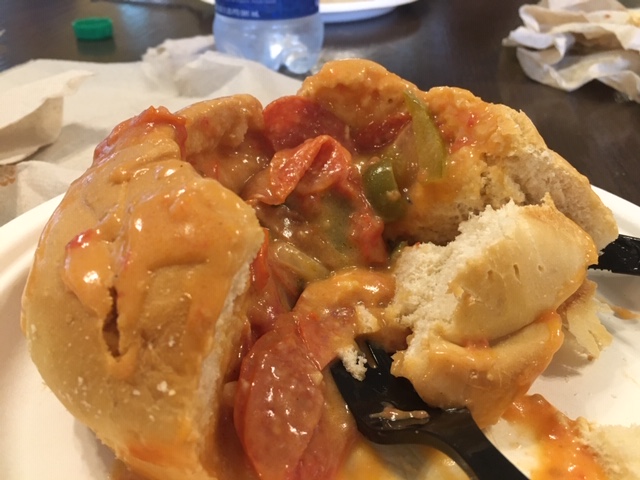 Pizza Soup in a Bread Bowl

The Christmas lights were absolutely breathtaking throughout the entire park. As this was our first visit to Dollywood - at Christmastime - it's going to be really hard to top it next time. The ambiance was so magical, the lights and decor were amazingly beautiful and the Christmas tree show was a great way to kick-off the holiday season for our family. The lights in the eagle area were ah-mazing - as there were single strands of lights hung from the trees. The beauty was only magnified as the sun set. There were lights and decor throughout the park and attractions and in every nook and cranny. Various holiday character meet and greets were also set up throughout the park. 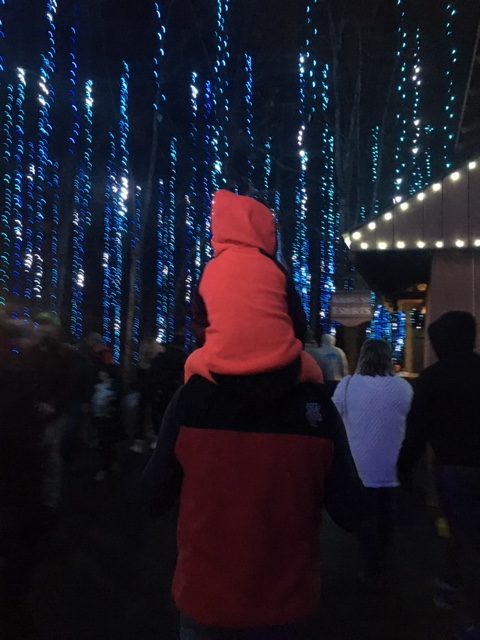 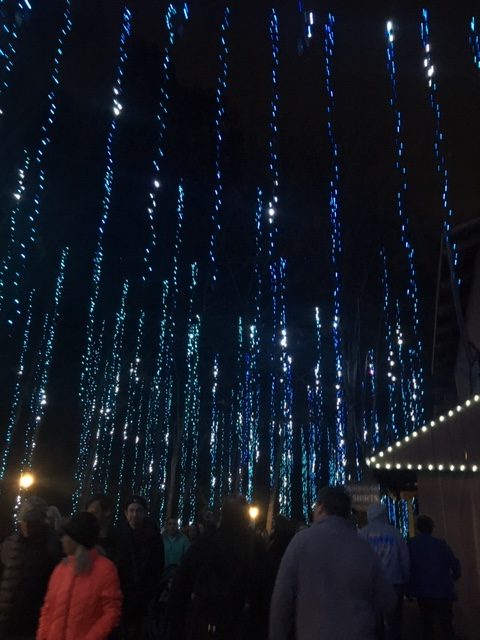 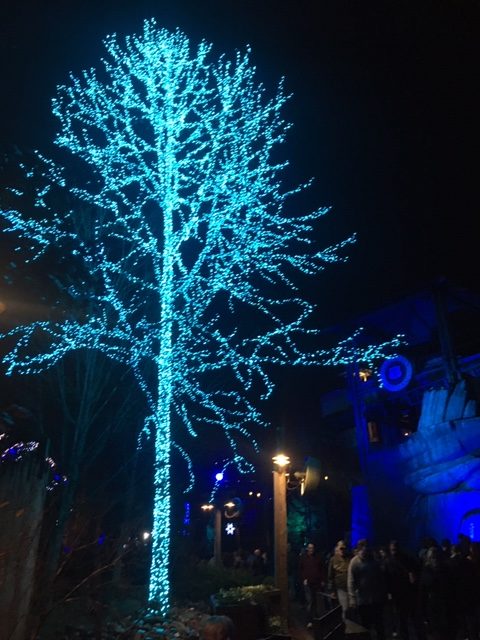 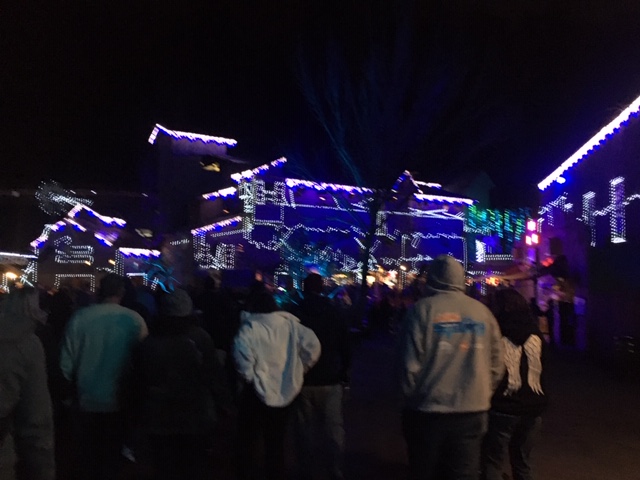 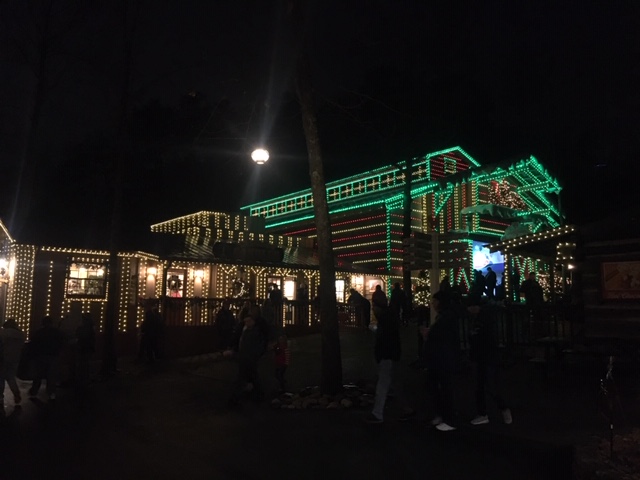 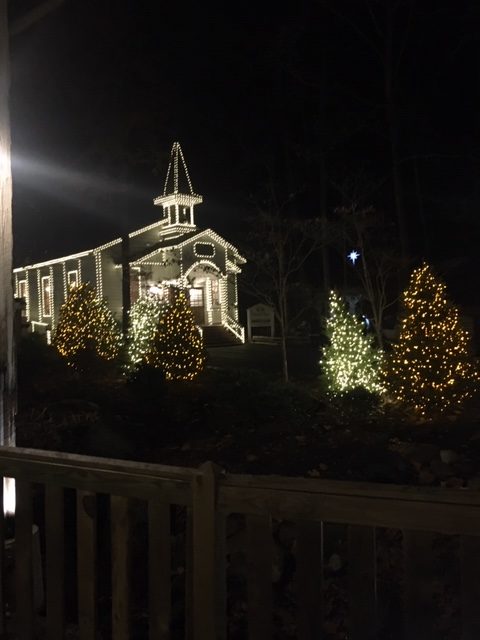 We really wanted to get on the train ride, the Dollywood Express, which looked majestic, but the lines were too long and spots weren't guaranteed. We will definitely be waiting for it during our next family trip to Dollywood. The train looked authentic, meandered through a cool looking tunnel and up the mountainside. It looked really majestic from up close and afar. It was definitely popular - and for good reason. 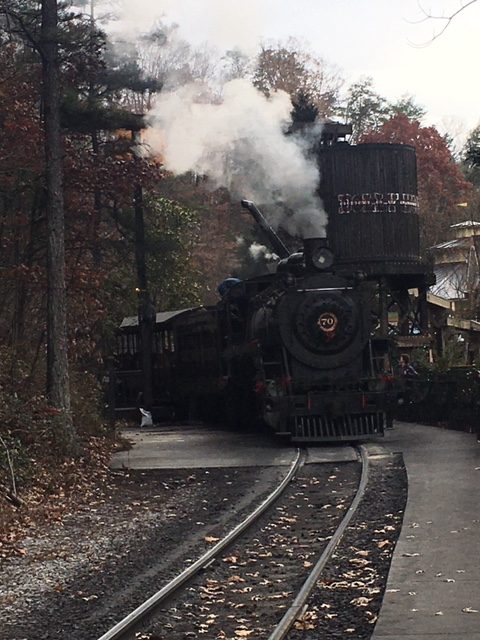 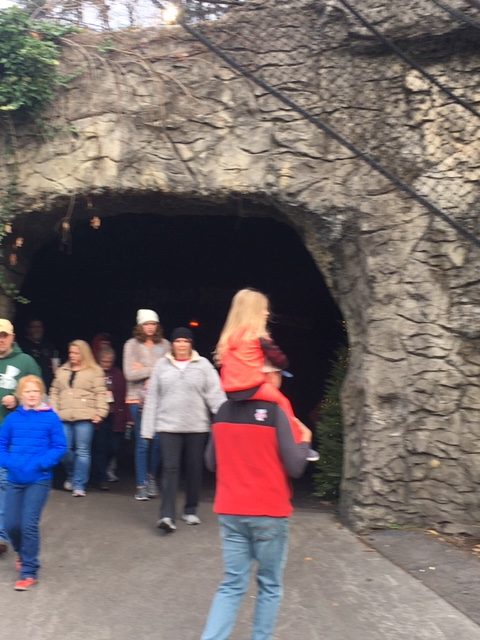 Our family could have easily spent two days at Dollywood - especially if we were able to bring our two older children on this road trip. On this trip, we didn't spend any time walking through the buildings, attractions or shops, sitting down and attending any shows and we didn't even get to stay until 8:00 pm for the Parade of Many Colors. We also didn't get a chance to ride any of the "big kid rides" or roller coasters since it was just us and our three year old. We will take advantage of the discounted two or three day passes on our next trip to the Smoky Mountains. Another fun perk with toddlers - children ages three years and younger receive FREE admission! Can you believe that?! 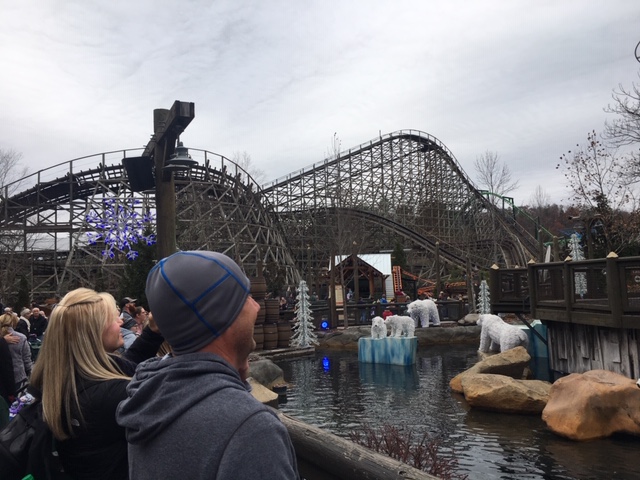 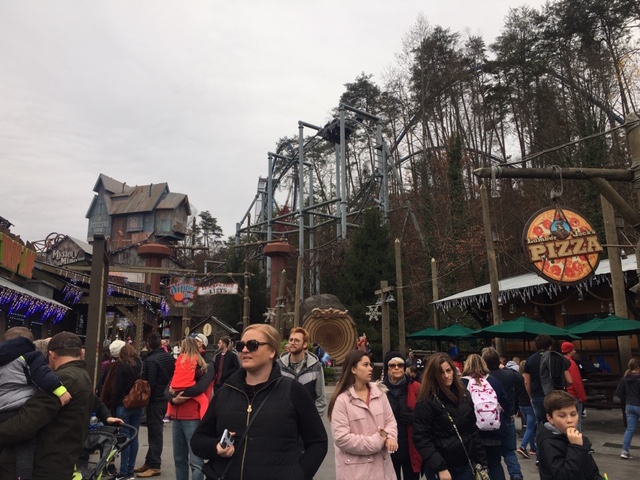 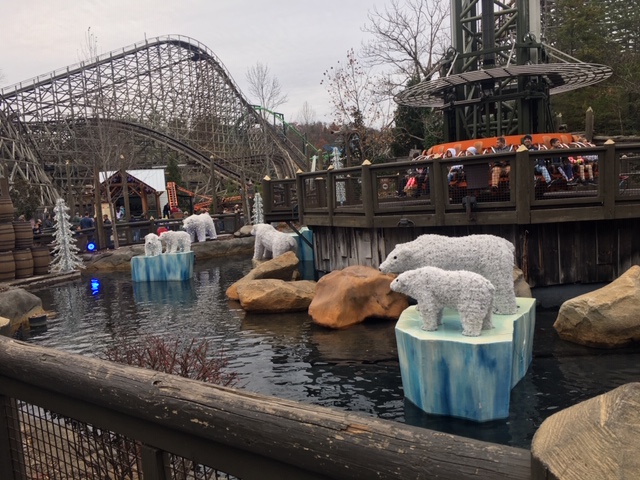 We will definitely be traveling back to the area with the big kids in a couple of years and will totally be setting aside a couple of days to visit Dollywood as a family of five. I can't wait to revisit and share this experience with the older kids - and ride some of those amazing coasters myself!

[Disclaimer: Our family participated as part of the Dollywood media program and received free admission to the park. All opinions are my own.]